Friends of the Mulberry and Mulberry River Society members collect quarterly data at the hwy 215 bridge.  Water chemistry and macro-invertebrates data has been taken at this location many years.

The Mulberry River is a 70 mile long, pristine white-water river located in northwest Arkansas. It drains are area of about 373 square miles and is a tributary of the Arkansas River. It is located mostly within the Ozark National Forest in the Ozark Mountains. The Mulberry starts in Newton county and generally flows westerly through Johnson and Franklin counties. The Mulberry joins the Arkansas River south of the town of Mulberry. The uppermost 56 miles of the Mulberry were made part of the National Wild and Scenic River System by the U.S. Government in 1992.


The Mulberry River is a well known destination for recreational boating with canoes, kayaks, and rafts. About 45 miles of the river is floatable beginning at Wolf Pen and ending at the confluence of the Arkansas River. During wet periods there are Class I to III rapids at many points in the river and the river can be dangerous if the water is high. Fishing on the river is also popular, with species including largemouth bass, smallmouth bass, sunfish, catfish, and rockbass, among others. Camping, swimming, and hiking along the Mulberry are enjoyed by tens of thousands of people each year.

The Mulberry River is easily accessible from I-40 via highways 215, 23, 103, and 21. There are several campsites along the river maintained by the U.S. Forest Service. Campsites are also available at Turner Bend and Byrds. These businesses also have canoes, kayaks, and rafts for rent, along with other gear needed for paddling the river and will provide shuttle service along the river. 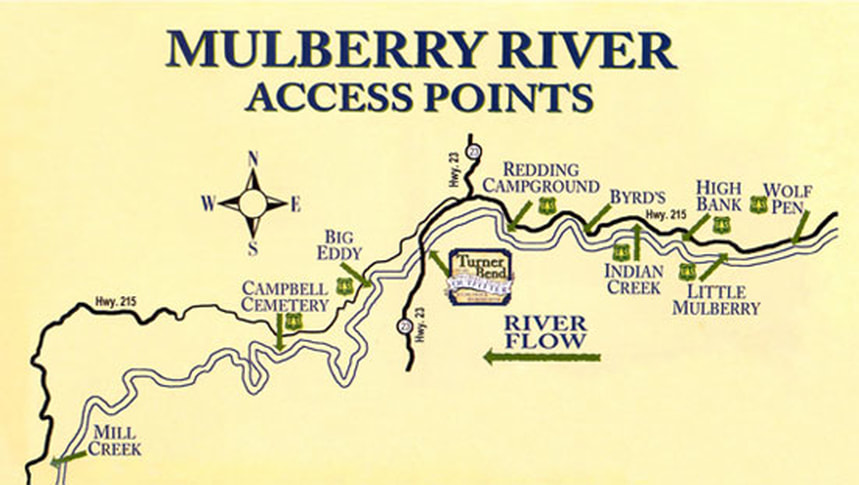